Home Home | Our Relationship | Policy & History | History of the U.S. and Iceland 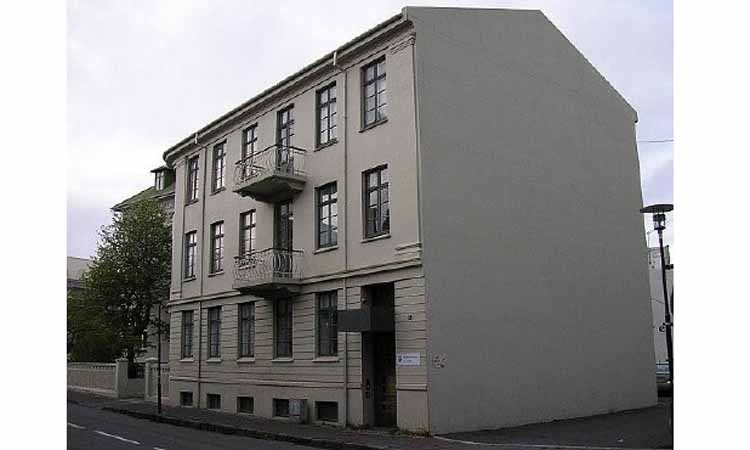 The First Legation was at Vonarstræti 4 in Reykjavik.

The U.S. Embassy in Reykjavik traces its roots to the April 1940 agreement between the U.S. and Iceland to establish direct diplomatic relations following the April 9 German occupation of Denmark.  U.S. Consul Bertil Eric Kuniholm arrived in Reykjavik May 24 and opened the Consulate officially on July 8.

In May 1940 British troops landed in Iceland to forestall a feared German invasion.  In July of that year Iceland’s representative in the U.S., Vilhjalmur Thor, asked the State Department whether Iceland could be placed under U.S. protection in accordance with the “Monroe Doctrine” (a long-standing U.S. policy asserting a U.S. role in protecting the Western Hemisphere from aggression).  Icelandic Foreign Minister Stefan Stefansson approached Kuniholm with a similar inquiry, which he characterized as “unofficial,” in December 1940.

The U.S. was initially cool to the idea of including Iceland within its security sphere. Finally in July 1941, at British urging and following an exchange of messages between President Franklin Roosevelt and Prime Minister Hermann Jónasson confirming the arrangement, American troops arrived in Iceland to reinforce and eventually to replace the British military.

Kuniholm’s first priority was to ensure that the U.S. military deployment established a foundation of trust upon which the U.S. could build a broad cooperative relationship with the Icelandic state.   As the U.S. Army’s official history of World War II notes, “the State Department pointedly enjoined all American military personnel to pay due respect to the local institutions, to refrain scrupulously from interfering with the prerogatives of the civil authorities, and to handle through the American consul, Mr. Kuniholm, all matters involving political affairs.”  Relations among the Consulate, the military, and Icelandic authorities proved to be close and productive.  This was aided by the coincidence that Kuniholm was a graduate of the U.S. Military Academy at West Point, where the new commanding general of U.S. forces on Iceland had been one of Kuniholm’s advisors.

In September 1941 the U.S. upgraded its level of representation in Reykjavik from Consulate to Legation with the arrival of Minister Lincoln MacVeigh as Envoy Extraordinary and Minister Plenipotentiary.    When Iceland declared itself a Republic on June 17, 1944, the U.S. was the first country to recognize it.   MacVeigh’s successor as Minister, Louis G. Dreyfus Jr., represented the U.S. at the June 17 ceremony at Thingvellir.

With the end of the war and the withdrawal of U.S. military forces, the Legation became the center of official American activity in Iceland, now increasingly focused on trade and investment.   In 1948, Foreign Minister Bjarni Benediktsson and new Minister Richard P. Butrick signed the Agreement under which Iceland would become a recipient of Marshall Plan assistance.   In 1955 the U.S. again upgraded the rank of its representation in Iceland, with John J. Muccio becoming the first U.S. Ambassador Extraordinary and Plenipotentiary to the Republic of Iceland and the Legation being redesignated an Embassy.  (A list of U.S. Ministers and Ambassadors to Iceland with dates of service is on the State Department Office of the Historian website.)

For over sixty years, the Embassy has played a central role in managing the growing range of ties between the two nations – in defense and security, trade and investment, culture and education, and, more recently, science and technology.  The Embassy has:

The players and issues change, but the Embassy’s fundamental mission is the same: to strengthen cooperation and understanding between the governments and peoples of the United States and Iceland, to the benefit of both nations.

The Chancery and Residence

In 1941 Minister McVeigh moved the mission from temporary space occupied by the Consulate to Vonarstræti 4 in downtown Reykjavik, renting the two top floors.  In 1947 the State Department purchased a house at Laufasvegur 23 as a Residence for the Minister.  Four years later the Department purchased the adjacent building at Laufasvegur 21 for the Legation offices, giving up the Vonarstræti property.  That building later belonged to the Ministry of the Environment and now houses city offices.

In 1955, the Legation was upgraded to the status of an Embassy.  Two years later the State Department purchased the house at Þingholtsstræti 34 as a dormitory for the Embassy’s Marine Security Guards. The new Marine House backed onto the Laufasvegur properties to form a small interior courtyard and garden.  This compound at Laufasvegur has remained the Embassy’s home for over half a century, undergoing several renovations and technological upgrades.

With the departure of the Marines in 1994, the Embassy converted the Marine House into office space for the growing Embassy staff, together with a hall was for meetings, lectures, and – with the march of technology – videoconferences with “visiting” speakers.