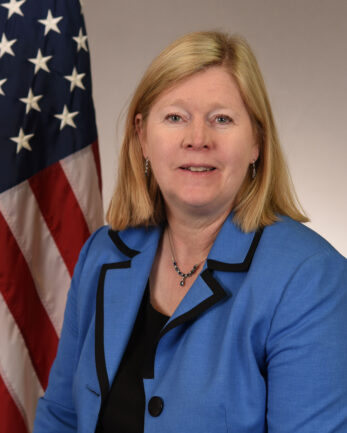 A career Foreign Service Officer with nearly 20 years of overseas and Washington experience, Erin Sawyer assumed the role of Deputy Chief of Mission at the U.S. Embassy to Iceland in December 2022.

Her more recent assignments have seen her providing strategic foreign policy advice and assessments to the Commander and senior leadership of the U.S. Air Forces in Europe and Africa, as well as managing civilian security assistance programs across Europe and Asia.

Other career highlights include leading a division at the Department of State’s Office of the Geographer analyzing complex humanitarian emergencies through maps and data visualization, and working as a part of the Multinational Force and Observers in Sinai, Egypt. Ms. Sawyer also served at U.S. Embassies in Laos, France, and Germany, and on short-term assignments in Thailand and the Central African Republic.

Prior to joining the Foreign Service, Ms. Sawyer was an attorney in San Francisco, representing venture capital funds and technology companies at all stages of development. She holds an M.S. in National Security Strategy from National War College; a J.D./M.A. from Stanford University; and a B.A. from Swarthmore College. She speaks French and German and is a member of the California Bar Association.

Ms. Sawyer is married to Carol Brooke, a senior career advisor for the Global Employment Initiative. They will be accompanied to post by Irish Terriers, Hugo and Freya, and expect occasional sightings of three grown children.