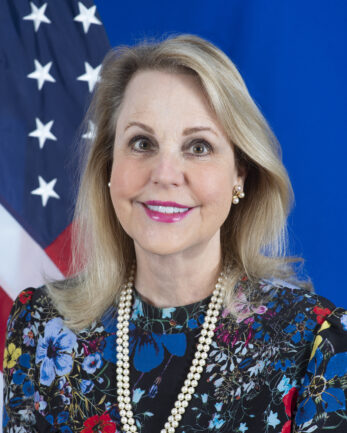 The United States Senate confirmed President Biden’s nomination of Carrin F. Patman as the Ambassador Extraordinary and Plenipotentiary of the United States of America to Iceland on August 7, 2022.  Prior to becoming ambassador, Carrin served for six years as the first woman board chair of the Metropolitan Transit Authority of Harris County, Texas, an agency that runs Houston and Harris County’s transit operations, with a $1.3 billion budget, 4,100 employees, and a 1,300-square-mile service area containing 3.9 million people.  For three decades Carrin was a trial lawyer for the international law firm of Bracewell LLP, handling major litigation involving commercial disputes, securities matters, antitrust and competition issues, and regulatory compliance, and she became the first woman elected to serve on the firm’s management committee.

Carrin’s distinguished record of civic engagement includes prior service on the boards of the Greater Houston Partnership (the Houston-area chamber of commerce), the Houston-Galveston Area Transportation Policy Council, Girls Incorporated of Greater Houston,  Sheltering Arms Senior Services, the Legacy Community Health Foundation, the University of Texas Law School Foundation, and the Houston Bar Foundation.  She was a member of the Houston Chapter of the International Women’s Forum, and a founding board member of the Center for Women in Law at the University of Texas School of Law.

Carrin earned her B.A. from Duke University and her J.D. degree from the University of Texas School of Law, and in 2014 completed a year-long Advanced Leadership Initiative fellowship at Harvard University.

Carrin’s multiple recognitions for professional achievement combined with community service include the Karen H. Susman Jurisprudence Award given by the Anti‐Defamation League (Southwest Region), the Distinguished Alumna for Community Service Award given by the University of Texas School of Law, the Greater Houston Women’s Chamber of Commerce Hall of Fame, and the Houston Women’s Transportation Seminar Woman of the Year.  Carrin is married to Jim Derrick, and they could not be more excited and honored to be serving in the United States’ very long-time and highly valued ally, Iceland.